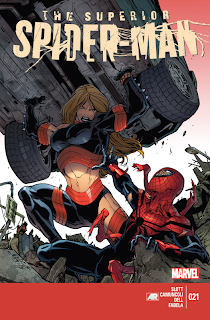 Old Doc Ock girlfriend Stunner, previously thought dead, is back and on the prowl, hunting down the man who she believes killed her old boyfriend. The woman who was Stunner, Angelina Brancale, is in a near vegetative state but she's been able to construct a virtual reality sort of mechanism that allows her avatar (still Stunner) to search the streets. Doc has no time for this, as shocked as he is to see Stunner alive again. He's busy plotting revenge on Lamaze, who had the gall to suggest he stole his work from Otto Octavius. He can't ignore Stunner, though, and manages to have his spider-bots trace the signal back to the real Angelina, who he confronts. He uses her own equipment to present himself as Otto to her and tell her that he still loves her but he's found someone new and that they both need to move on and hey, don't be mad at Spider-Man, maybe? She agrees to this and he uses the equipment again to have Otto pay a visit to Lamaze, where he convinces the professor that Peter was Otto's assistant and all of the ideas that Otto came up with were actually Peter's, but that Lamaze shouldn't tell anyone. Lamaze rescinds his complaint to the board and Peter is all but certain to be made a doctor. Meanwhile, Carlie Cooper goes to "Doc Ock's" grave and places flowers, swearing to the grave that she'll make sure everything is put right. Unfortunately, before she can do that, she falls into the empty grave (there's no body!) and she's secreted away by the Goblins, who find her journal as well.

I've been reading a lot of compliments of this issue on Twitter (granted, they're posted and retweeted by Dan Slott) and I have to say that I don't really see it. I don't think this issue was bad, per se, I just don't think it was particularly earth-shattering. The Carlie stuff seems to be going on forever, the Stunner stuff seemed less of a threat than a means to an end (letting Peter use the equipment to solve his problems), there was more relationship stuff with Anna Maria (how everyone in the world doesn't realize that Peter Parker is Spider-Man is the biggest example of suspension of disbelief in a comic where someone was bitten by a radioactive spider, granted spider powers, mind-swapped, and killed) but it just kind of solidifies what we've already seen plenty of, and the Lamaze threatening to derail the doctor stuff was kind of already a weak premise (would it really have held up that Peter had "stolen" his data from unpublished works?). That leaves the biggest exciting plot point the fact that there's no body in the grave, I suppose, but it's hard to even see that as a big moment as that could be indicative of just about anything. Not my favorite issue of the series; Slott said on his Twitter that the "cracks are starting to show" for Doc Ock but I'm not even sure I feel that particularly from this. He nearly indicates to Stunner that he's Doc Ock in order to save his life and presumably because he still feels something for her, but how often are ex-girlfriends of Doc liable to show up? We've already seen Aunt May so, you know, that should about cover it all. Next issue will invoke the other spiders (Venom and Kaine, or at least Venom to start) so I'm pretty excited about that, hoping for a stand-out issue. 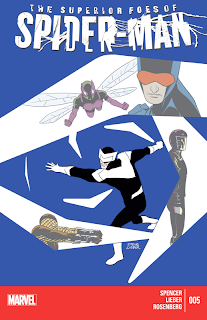 Boomerang is leading his crew on an attack of Owl's hideout, a risky attack at best and one that hasn't been thought out particularly thoroughly, at least not by Boomerang. Beetle is still harboring resentment about the coup on her leadership and drew up plans for everyone for the attack, but Boomerang refuses to use them. Eventually he has to refer back to them, though, as he almost instantly gets lost. His team goes on ahead of him while he covers their rear before discovering that a service elevator they previously thought out of service to be working. His team continues to fight their way, tooth and nail, through a gauntlet of challenges while Boomerang leisurely makes his way to the basement, securing "the most valuable and sought after piece of art on this Earth - - 'The True Face of Victor Von Doom.'" A painting, not the head of Silvermane, which Boomerang asserts does not actually exist. Meanwhile, city workers dig the car Boomerang sent into a lake out of said lake, allowing Shocker to break free again. He runs into a child and his dog at the junkyard he ends up at and, lo and behold, it's the same child from the story Boomerang told in SUPERIOR FOES OF SPIDER-MAN 3, a child who has befriended the head of Silvermane. Shocker grabs the head and runs off.

If you clicked that link above, you won't find my description of the story with the child in the summary; rather you'll find it in the analysis where I complain about how long it took to relate, particularly as it seemed to have no bearing on the plot. Okay, whatever, APPARENTLY it has some bearing on the plot after all and I maybe should have gone into it a little more. The last thing I need is comics telling me I don't summarize enough on this blog. Anyway, this issue has a nice feel to it. I think either this comic has pretty firmly found its footing or, as the audience, I've come to understand the feel better. Either way, the comic is working well and it has a sense of fun and a sense of story that I think matches the art and the tone it's striving for extremely well. Where the plot is going is another question entirely but there are certainly things to be intrigued by, including the near-continual breakdown of the team, Shocker's re-emergence, and Boomerang's insistence on being leader though he's not qualified for it. Fun writing, fun layout, fun art, just an overall pretty fun book. 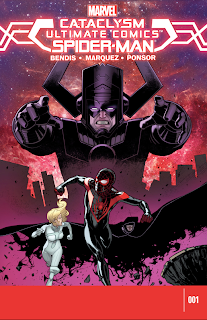 Cataclysm has fully hit the Ultimate Universe and it promises to bring destruction with it, possibly ending in the demise of the Ultimate Universe as a whole. Among those in its way are the characters of Spider-Man land, including Miles himself, Jessica Drew, Cloak and Dagger, and Lana Baumgartner (Bombshell). This issue shows exactly what all of them are up to in the moments before Galactus' appearance. Miles is dozing off in class before going out on patrol, where he's greeted extremely favorably by cops. Jessica is presenting her case for not being fired to Monica Chang and the Ultimates, who are unaware of what happened and her background but are fully on her side when they hear. Cloak and Dagger try to return to Dagger's home only to find that her family moved away, leaving them both with their lasting anger. Lana meets with her parole officer who informs her that her latest antics (covered by local newspapers) can get her arrested for using her powers again. Then Galactus shows up.

There is kind of a feeling to this issue that Bendis wishes he had another one before entering into Cataclysm, one to set everything up a little more firmly. So instead, this is that issue. Galactus doesn't appear until the very last page and everything else that's happening, while important to these characters, is nearly unrelated to the actual event, or so it seems. Of course, it does ensure that we see all of these characters, recently teamed in their fight against Roxxon, in the battle against Galactus in the coming issues of CATACLYSM - ULTIMATE SPIDER-MAN and it gives us a little idea of where they landed after the fact. The most important part, then, seems to be that everyone has found reasons to fight. Jessica obviously was already fighting but she informs the Ultimates that Miles is back and looking good, Miles is encouraged by the positive reception he gets, Ty and Tandy are pushed by their anger, and Lana is beginning to feel like she was meant to be a superhero and that doing the right thing is worthwhile in and of itself. So there's enough happening here that the story moves pretty well, particularly as a sort of cool-down from the last few issues and a link between those and the next few but it comes at something of a strange time. I do think the book doesn't hurt from the cool-down (though we already had several issues in a row just before this last arc that showed Miles dealing with internal struggles that could serve as something of a cool-down) but to place a relax issue at the start of an event is an odd decision. It feels like either Bendis had too little time for his last arc or has too much or the next one. Neither option is particularly thrilling.
Posted by Tim Nicastro at 2:00 PM